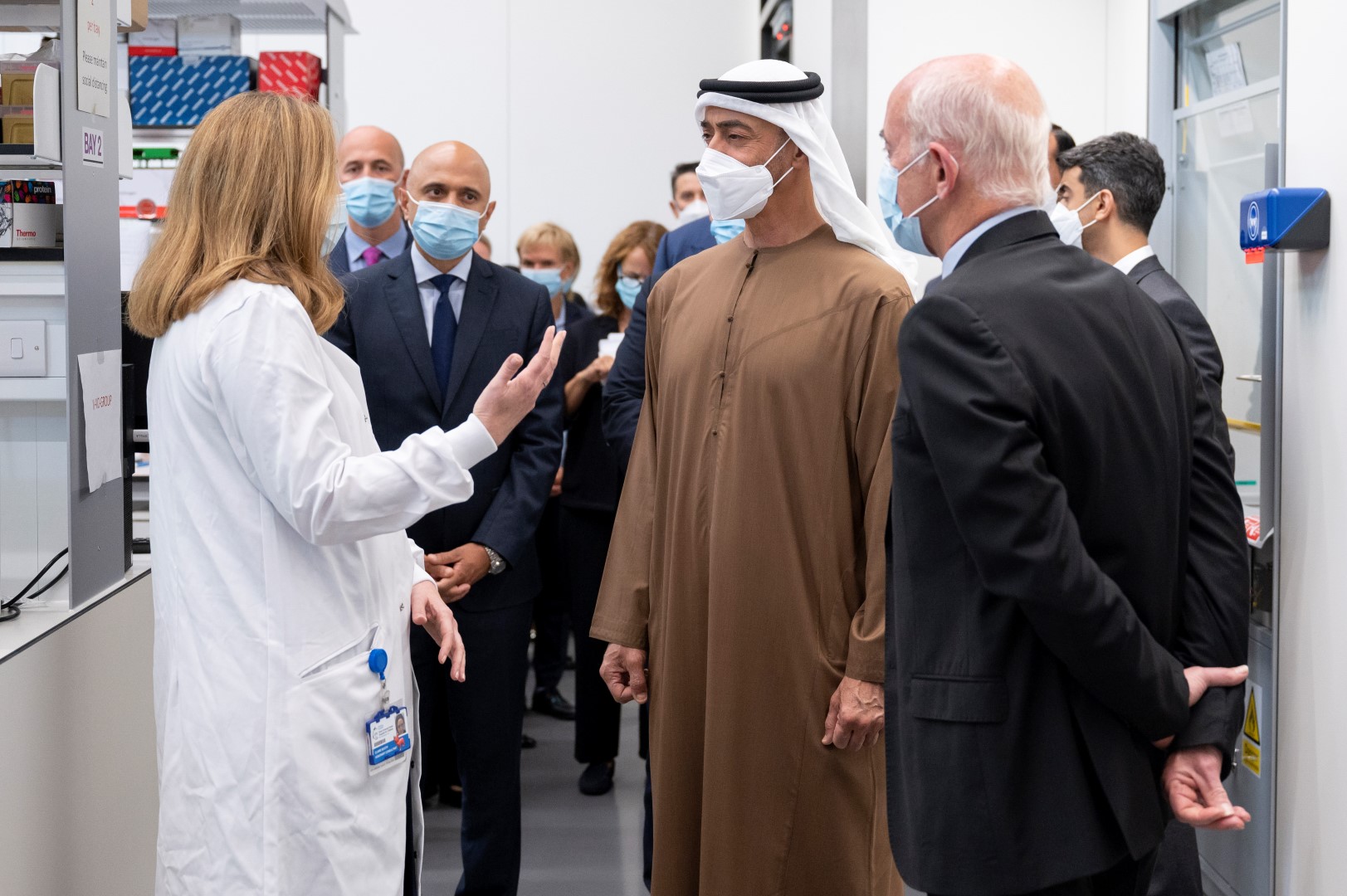 The Zayed Centre for Research into Rare Disease in Children (ZCR) today welcomed His Highness Sheikh Mohamed bin Zayed Al Nahyan, Crown Prince of Abu Dhabi and Deputy Supreme Commander of the UAE Armed Forces, who toured the facility and met with researchers, professors and doctors to learn about the Centre’s lifesaving research and treatments. Upon arrival at the centre, His Highness Sheikh Mohamed bin Zayed was received by UK's Secretary of State for Health and Social Care and Sajid Javid, Secretary of State for Education, Nadhim Zahawi. Matthew Shaw, Chief Executive of Great Ormond Street Hospital, and Prof Rosalind Smyth, Director of UCL Great Ormond Street Institute of Child Health, explained the Centre’s world-first model for paediatric medicine, which brings together under one roof cutting edge research and world class clinical care. This bench-to-bedside approach accelerates the diagnoses, treatment and cures of rare diseases in children. Sheikh Mohamed bin Zayed toured the main laboratory, which includes 140 dedicated research benches and the genomics team lab, and was briefed on the Centre’s specialist facilities that have enabled it to play a vital role in the global response to covid19. The Pathogen Genomics Unit has sequenced 15,500 samples, informing scientists of the changing nature of the virus, and the impact of new and repurposed drugs in the treatment of serious viral infections in children. The visit also included a briefing on the importance of the state-of-the-art specialist clean rooms - the largest single academic manufacturing unit for gene and cell therapies in the UK and one of the largest in the world – where products are manufactured for use in groundbreaking gene therapy trials. His Highness also had the opportunity to thank Mohamed Al Ameri, a ZCR Researcher and PhD candidate of Epigenetics of Pediatric Leukaemia Diagnostics, UCL, for his pioneering research into how a person’s DNA is altered in cancer cells, highlighting that this work has the potential to not only benefit cancer patients in the United Arab Emirates, but also the world over. While at the Centre, His Highness met Ali Hamed Al Ketbi, a 10-year old patient, who is improving steadily as he undergoes treatment at Great Ormond Street Hospital. Sheikh Mohamed wished Ali well, and expressed his gratitude to the hospital staff for their kind and expert care, emphasising the value of helping sick children, particularly those who are far from home, can never be underestimated. The Centre, which will celebrate its second anniversary in November, is a partnership between Great Ormond Street Hospital (GOSH), University College London and Great Ormond Street Hospital Children’s Charity, and was made possible thanks to a generous ₤60 million gift in 2014 from H.H. Sheikha Fatima bint Mubarak Chairwoman of the General Women's Union, President of the Supreme Council for Motherhood and Childhood, and Supreme Chairwoman of the Family Development Foundation. The visit was also attended by H.H. Sheikh Hamdan bin Mohamed bin Zayed Al Nahyan; Sheikh Mohammed bin Hamad bin Tahnoun Al Nahyan, Chairman of Abu Dhabi Airports; Khaldoon Khalifa Al Mubarak, Chairman of the Executive Affairs Authority; Mohamed Mubarak Al Mazrouei, Undersecretary of the Crown Prince Court of Abu Dhabi; Mansour Abulhoul, UAE Ambassador to the UK, Prof Maha Barakat, Director General of the Frontline Heroes Office.