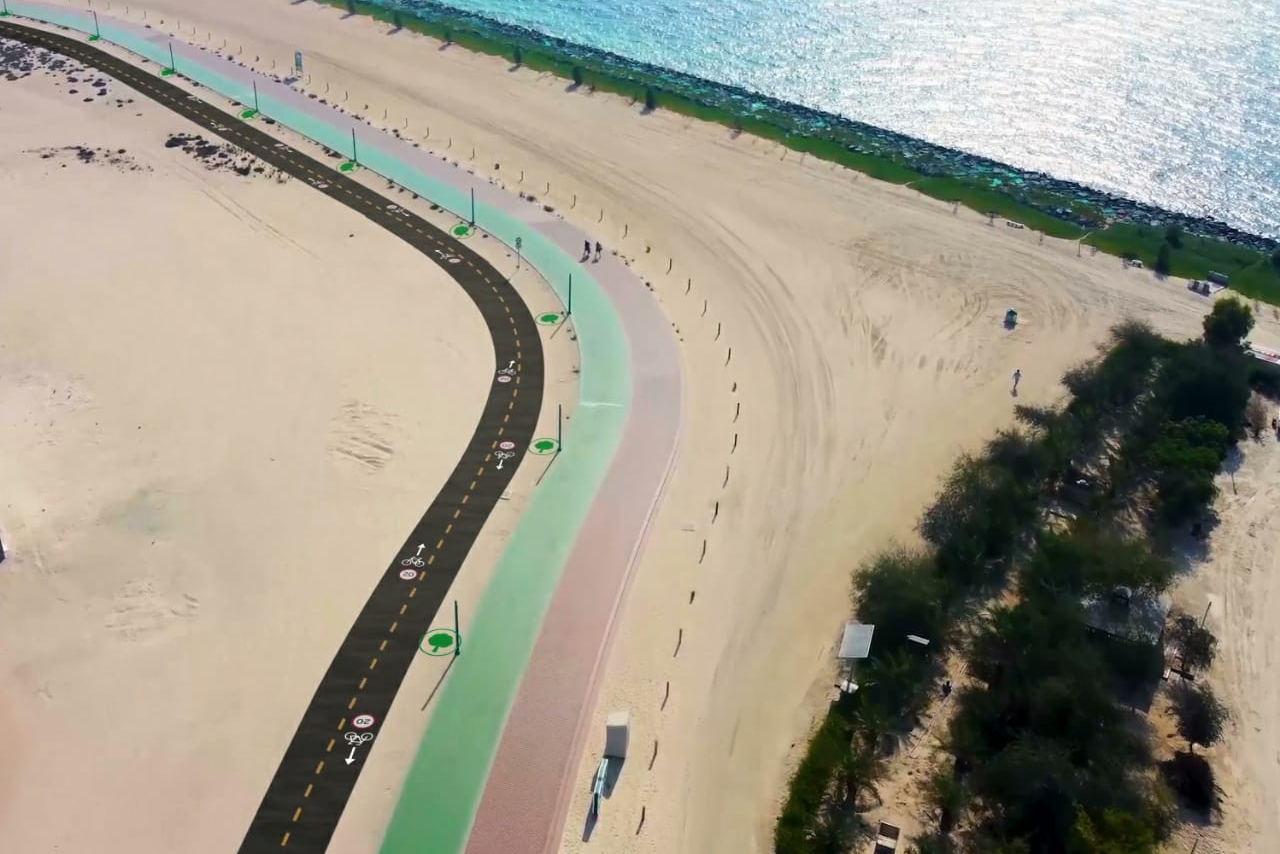 H.H. Sheikh Hamdan bin Mohammed bin Rashid Al Maktoum, Crown Prince of Dubai and Chairman of Dubai Executive Council, ordered the construction of a cycling track extending 16 km alongside Jumeirah Beach. The new track will connect the existing Jumeirah Street cycling track parallel to the Dubai Water Canal with the existing cycling track alongside King Salman bin AbdulAziz Al Saud Street located in Dubai Internet City. "The construction of this cycling track is part of our efforts to realise the vision of His Highness Sheikh Mohammed bin Rashid Al Maktoum, Vice President, Prime Minister and Ruler of Dubai, to improve the quality of life of people and enhance their happiness. It is also a step to advance sustainable mobility," said Mattar Mohammed Al Tayer, Director-General and Chairman of the Board of Executive Directors of the Roads and Transport Authority (RTA). "It also responds to the directives of H.H. Sheikh Hamdan bin Mohammed bin Rashid Al Maktoum, Dubai Crown Prince and Chairman of The Executive Council, to transform Dubai into a bicycle-friendly city. It involves the provision of suitable alternatives to encourage people to practise cycling. It contributes to the Dubai 2040 Urban Master Plan, which aims to make Dubai the best city for living in the world. Constructing this cycling track alongside Jumeirah Beach is a quality addition to the infrastructure projects undertaken by Dubai Government to promote sports and recreational activities and further enhance the community’s standard of living and wellbeing," added Al Tayer. Detailing the integrated services of the project, Al Tayer said, "The new cycling track stretches 16 km alongside Jumeirah Beach and links the existing Jumeirah Street cycling track (at Dubai Water Canal) with the existing cycling track along King Salman bin Abdul Aziz Al Saud Street (at Dubai Internet City). "The first sector of the track has a width of four metres stretching alongside Jumeirah Beach in parallel to the existing jogging and walking tracks that extend from Dubai Water Canal to Umm Suqeim Park. The second sector, which has a width of three metres, runs alongside Jumeirah Street and King Salman bin Abdul Aziz Al Saud Street up to Dubai Internet City. It will serve several hotspots alongside Jumeirah Beach such as the Sunset Mall, Open Beach, Dubai Sailing Club, Kite Beach, Umm Suqeim Park, and Burj Al Arab. "The public can use the track for cycling alongside a beach that boasts a variety of service facilities. They can also benefit from the shared bike services available at the Sunset Mall, Al Manara Mosque and Umm Suqeim Park. The speed limit set for this track is 20 km/h and is classified among mobility, sports and leisure tracks," commented Al Tayer. "The cycling track along Jumeirah Beach is part of a master plan for constructing cycling tracks to link vital areas of the Emirate. The Master Plan for Cycling Tracks 2026 envisages the construction of additional cycling tracks extending 276 km, which will bring the total length of cycling tracks in the Emirate to 739 km. The Plan aims to link the tracks at the coastal areas, such as Jumeirah, Al Sufouh and Al Marina with the external tracks at Al Qudra, Seih Assalam and Nad Al Sheba via Al Barsha, Dubai Hills and Nad Al Sheba," explained Al Tayer. "The design, construction and setting of speed limits for cycling tracks are in line with top international standards and technical directories. It is also customised to the nature of the locality and the classification of the tracks. These tracks encourage residents and visitors to practise cycling such that it will develop into an alternative and sustainable mobility means that serves the first and last-mile strategy," concluded Al Tayer. Dedicated cycling tracks constructed till the end of 2020 extend a total of 463 km. RTA is seeking to further extend the total length of cycling tracks to 739 km by 2026 to link vital areas of the emirate with various public transit means. RTA has set a speed limit of 30 km/h for tracks dedicated to cyclists. Tracks in urban areas dedicated to cyclists or shared with pedestrians have a speed limit of 20 km/h. However, no specific speed limits have been set for cycling tracks created for training purposes. The speed limits aim to ensure the safety of both pedestrians and cyclists.