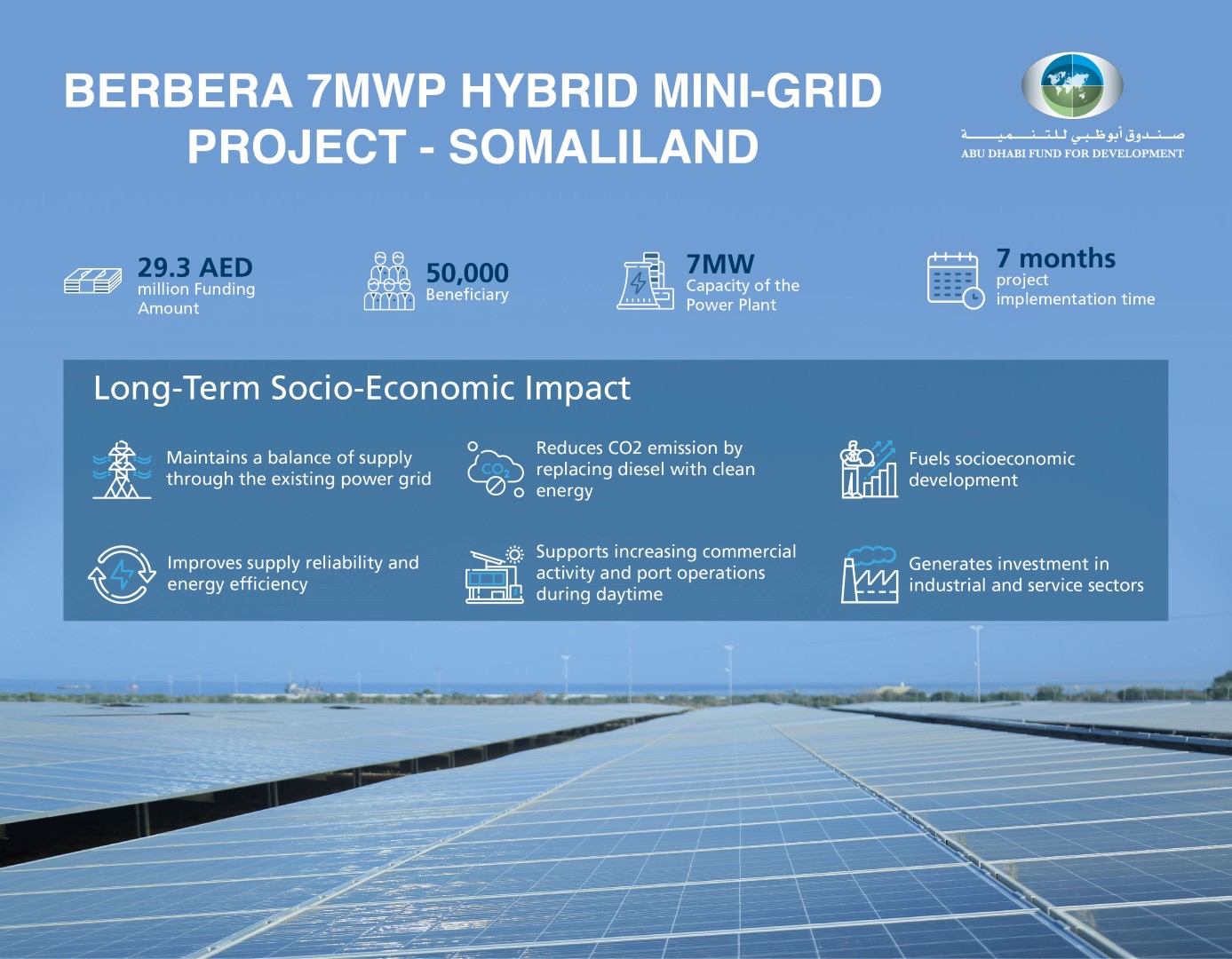 ADFD-funded solar project to light up, power city in Somaliland

Abu Dhabi Fund for Development (ADFD) funded solar energy project at Berbera City in Somaliland has been connected to the local electricity grid. It will meet the increasing demand of the entire city of approximately 50,000 people. Set up at a cost of AED29.3 million, the 7-megawatt Berbera Hybrid Mini-grid Project is seen as a game changer for the city, as it will significantly bring down energy tariffs, apart from supporting economic development and reducing the country’s carbon footprint. The expansion of Berbera city has created additional demand, which the plant will fulfil. The project was launched by Abdirahman Abdilahi Ismail, Vice President of the Republic of Somaliland, under the auspices of Jama Mohamoud Egal, Minister of Energy and Minerals, in the presence of officials and dignitaries from both sides. Commenting on the momentous occasion, Mohammed Saif Al Suwaidi, Director-General of ADFD, expressed satisfaction over the completion of the project in a record time of seven months, from March to October 2020, overcoming the obstacles created by the coronavirus pandemic. "Our renewable-energy project in Berbera will play a strategic role in our larger effort to sustainably drive up the economy and raise the standard of living in benefited area," he said, adding that its benefit would be felt at many levels. "The demand for energy is growing continuously in Berbera as the population swells. "This project will supply energy at a comparatively affordable price as it will replace the costly diesel with solar energy. That will lead to heightened economic activity, financial savings, reduction of carbon emissions and, therefore, improve the air quality. This will bring a qualitative transformation in the city." Jama Mohamoud, thanked ADFD for completing the project in record time notwithstanding the many challenges. "It came at a time when we needed it the most," he said, commending the role of the UAE and the Fund in supporting his country’s economy through infrastructure development. "This is the first of its kind project in the country that will benefit individuals and businesses, while supporting the expanding port infrastructure. More importantly, its positive effect will be felt beyond the city borders. The project will stabilise electric supply in the city and make electricity more affordable to its estimated 50,000 people. The power plant will further support commercial development and port expansion. We are also happy to be joining the rest of the world in our efforts to tackle greenhouse emissions." A Memorandum of Understanding was signed on the sidelines of the event, which was witnessed by ADFD that had transferred the plant’s ownership to the Ministry of Energy and Minerals on behalf of the Government of Somaliland and appointed a consulting company, Coretec, to provide necessary support to the Ministry of Energy and Mineral Resources in developing an overall operational structure for the project. The deal agreed in principle on a public-private partnership (PPP) to operate and maintain the solar plant, the first of its kind in the country. "This could well serve as a reference model for the rest of the country," said the minister. The project involved construction of the solar power plant; supply of raw material; installation of electrical and mechanical equipment. Somaliland is one of the many countries in the African continent where ADFD has been actively supporting the government to achieve their development targets. In 2017, the Fund earmarked AED330 million ($89.8 million) for the development of critical infrastructure in the country. Part of this amount is being used for the Berbera-Hargeisa road project, whose foundation was laid in 2019.