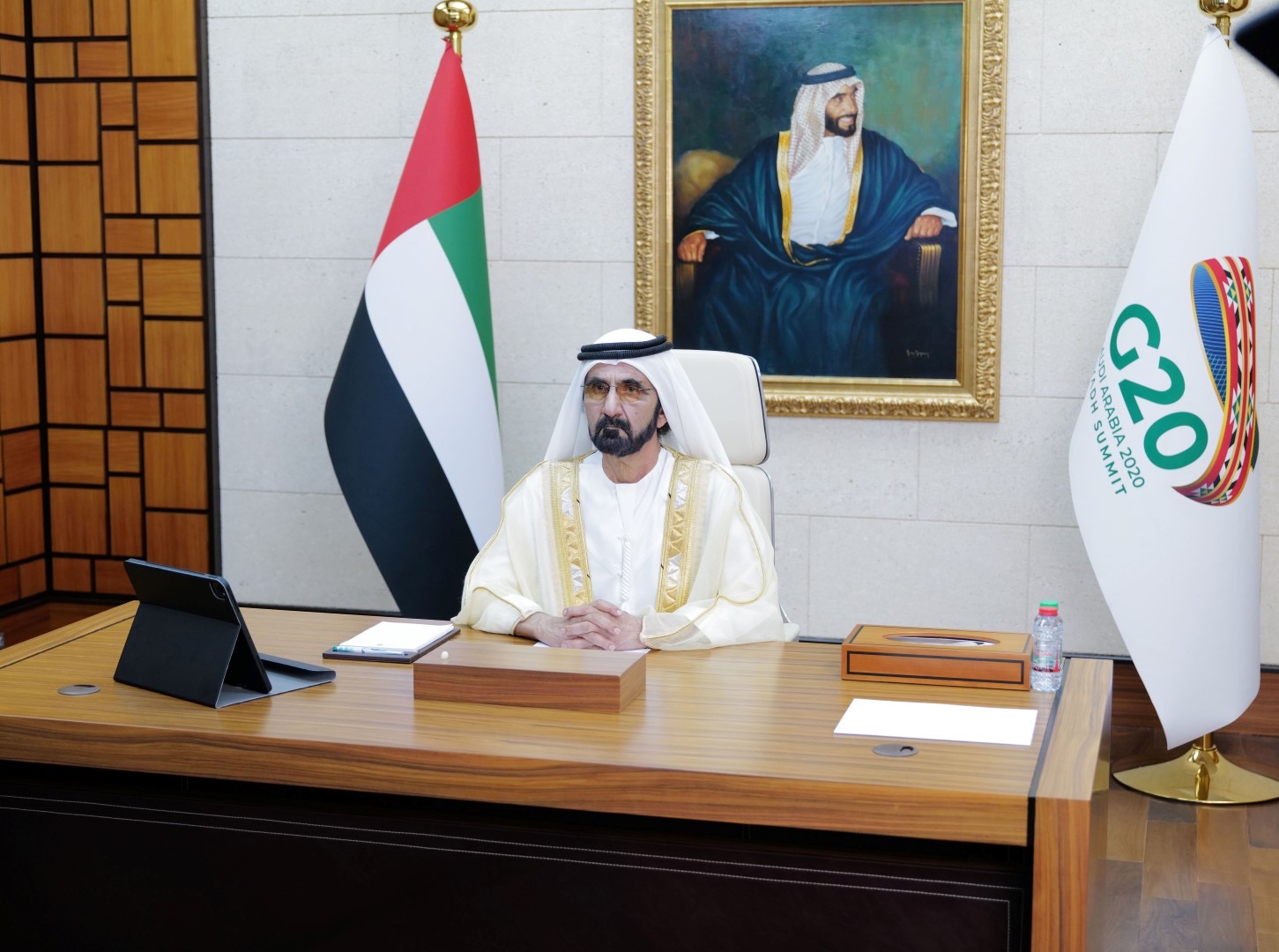 His Highness Sheikh Mohammed bin Rashid Al Maktoum, Vice President, Prime Minister and Ruler of Dubai, participated in the virtual G20 summit, held on Saturday under the chairmanship of the Custodian of the Two Holy Mosques King Salman bin Abdulaziz Al Saud of Saudi Arabia under the theme: "Realizing Opportunities of the 21st Century for All". As the current chair Chair of the GCC, UAE participates in the G20 summit with the aim of coordinating joint efforts and promoting global cooperation to contain COVID-19 and to mitigate its humanitarian, health and economic impact on the peoples and nations all over the world. The UAE participates in the summit, along with the G20 member countries, heads of invited states and representatives of international organisations, including Food and Agriculture Organisation (FAO), the Financial Stability Board (FSB), the International Labour Organisation (ILO), the International Monetary Fund (IMF), the Organisation for Economic Cooperation and Development (OECD), the United Nations (UN), the World Bank Group (WBG), the World Health Organisation (WHO) and the World Trade Organisation (WTO).​ Sheikh Mohammed praised Saudi Arabia's Presidency of the summit and the great efforts it made, under the wise leadership of King Salman bin Abdulaziz Al Saud, for organising the summit during these exceptional times. "This testifies to Saudi Arabia's global pioneering role and its keen support to global efforts to overcome all challenges facing nations of the world." Sheikh Mohammed described the G20 as the world's largest platform to face overcome challenges and to discuss ways to utilise countries and governments' potentials for a better future to the world. "Today, the world is facing the same risks and humanity shares a common destiny," he added. Sheikh Mohammed noted that since the onset of the pandemic, the UAE sought, under the directives of President His Highness Sheikh Khalifa bin Zayed Al Nahyan, to play an effective role in support of the global efforts to contain the virus and to step-up international cooperation in order to reach solution to the crisis which has taken toll, not only on healthcare sector, but also economic and social sectors. "The entire world is going through critical time, anticipating an end to this crisis. This calls for collective efforts and international cooperation to ride out the COVID-19 crisis, to build strong, sustainable, and inclusive growth and recovery in all sectors and to mitigate any health, economic and social impacts." Sheikh Mohammed commended the participants of the G20 summit and their contributions to the efforts aimed at overcoming the challenges posed by COVID-19 pandemic. He renewed UAE's support to the Group and its goals of boosting poor countries' capabilities to deal with the current crisis. "The UAE looks forward to contributing to the G20's agenda and joint action to make the world better for future generations." The summit's opening day saw two sessions addressing topics of pandemic preparedness and response and building an inclusive sustainable and resilient future.