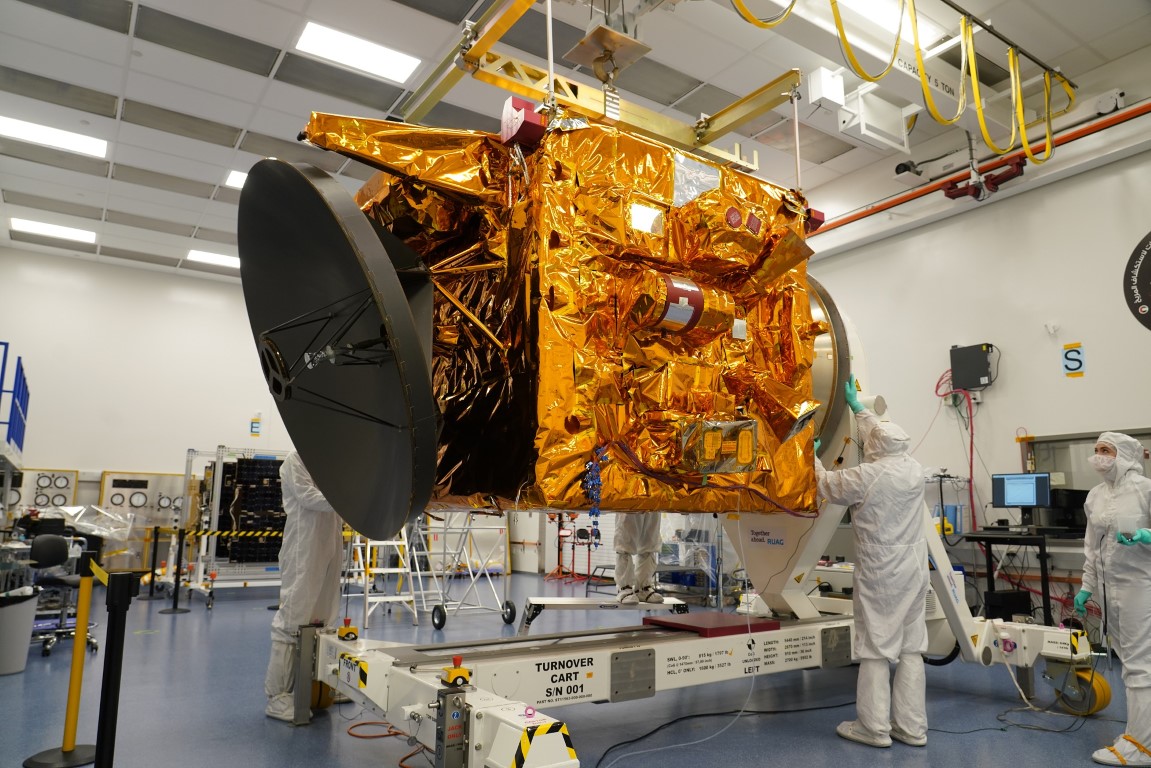 Achieving a critical milestone in its readiness for launch, the Emirates Mars Mission – Hope Probe spacecraft was encapsulated within the payload fairing ahead of its liftoff from the Tanegashima Space Centre, TNSC, in Japan on 15th July 2020. "All testing and checks leading to the full launch and mission-readiness are currently being carried out," read a joint statement by UAE Space Agency and the Mohammed bin Rashid Space Centre, MBRSC, adding that the capsule has been positioned securely onto the rocket. "Throughout the process, the team continues to monitor the stages of the Probe. This will be followed by joint operations with Mitsubishi Heavy Industries, MHI, to trickle-charge the spacecraft and set it for takeoff. This stage also included functional tests of the spacecraft subsystems, along with electrical power, communication, altitude control, command and control, propulsion, thermal control and software systems," the Centre noted in a statement. The encapsulated Probe has been transferred to another building where the rocket [first and the second stage] and the launch pad are located. The mounting of the spacecraft onto the rocket involved a thorough monitoring of the interface points, ensuring that all was in order. Subsequently, the Multi-Layer Insulation (MLI) and the Arming Plugs were firmly sealed. About an hour after the launch, the Probe will separate from the launch rocket. It will launch its solar panels and begin the seven-month journey towards the Red Planet using a propulsion system. "The encapsulation marks a major milestone in the spacecraft’s journey and is the step that precedes the probe spacecraft being mounted on top of the rocket that will carry it into the Martian orbit," the statement said. It added that before the Probe was placed inside the capsule, it was covered with thermal sheets to protect it against the dynamic temperature, pressure variations and environment during its cruise. "The encapsulation process was overseen by a team of Emirati engineers on-ground in Japan, along with their Japanese counterparts," it went on to say. The Hope Probe is set to liftoff on 15th July 2020 at 00:51:27 UAE time from the Tanegashima Space Centre. "The scheduled launch date represents the opening of the launch window for the mission, which extends to 13th August 2020 – in order to ensure that the Probe reaches its desired orbit in the shortest possible time, consuming the lowest possible energy," the statement noted. The team will continue to monitor and test ahead of the final countdown, which begins 16 hours before the scheduled liftoff. Omran Sharaf, Emirates Mars Mission Project Manager, said, "The encapsulation and mounting of the capsule onto the rocket are one of the key milestones of the mission. It is an intricate process, which encompasses technical evaluations, system verifications and validation and examining every single aspect of the spacecraft." Omar Al Shehhi, Launch Team Lead, said, "The encapsulation and the transfer of the Probe to the rocket is vital step in our historic mission. The process entails continuous monitoring and detailed testing to ensure that all systems are functioning to optimum levels." A team of Emiratis is leading the operation and supervising every aspect of the Probe’s preparation for its launch. Apart from Omran Sharaf Al Hashemi, the team includes Suhail Al Dhafari Al Muhairi, Deputy Project Manager of the Probe Development Team, Omar Al Shehhi, Launch Team Lead, Mohammed Wali, Deputy Project Manager for Launch Affairs, Mohsen Al-Awadhi, Risk Manager, Youssef Al-Shehhi, Thermal Systems Engineer, Khalifa Al-Muhairi, Communication Systems Engineer, Issa Al-Muhairi, Power Systems Engineer, Ahmed Al-Yammahi, Mechanical Systems Engineer, Mahmoud Al-Awadhi Mechanical Systems Engineer, and Mohammed Al-Ameri, Ground Support Systems Engineer. Mohammed Wali, Deputy Project Manager of the Launch Team, said, "Each and every stage and step – from encapsulation to getting it mounted on the rocket – is extremely critical. The encapsulation is a proud and emotional moment for the Hope Probe project team. After six years of hard work, our Probe is one step closer to launch." The Hope Probe is anticipated to enter the Mars orbit in February 2021, coinciding with the UAE's Golden Jubilee celebrations to mark the historic union of the Emirates.