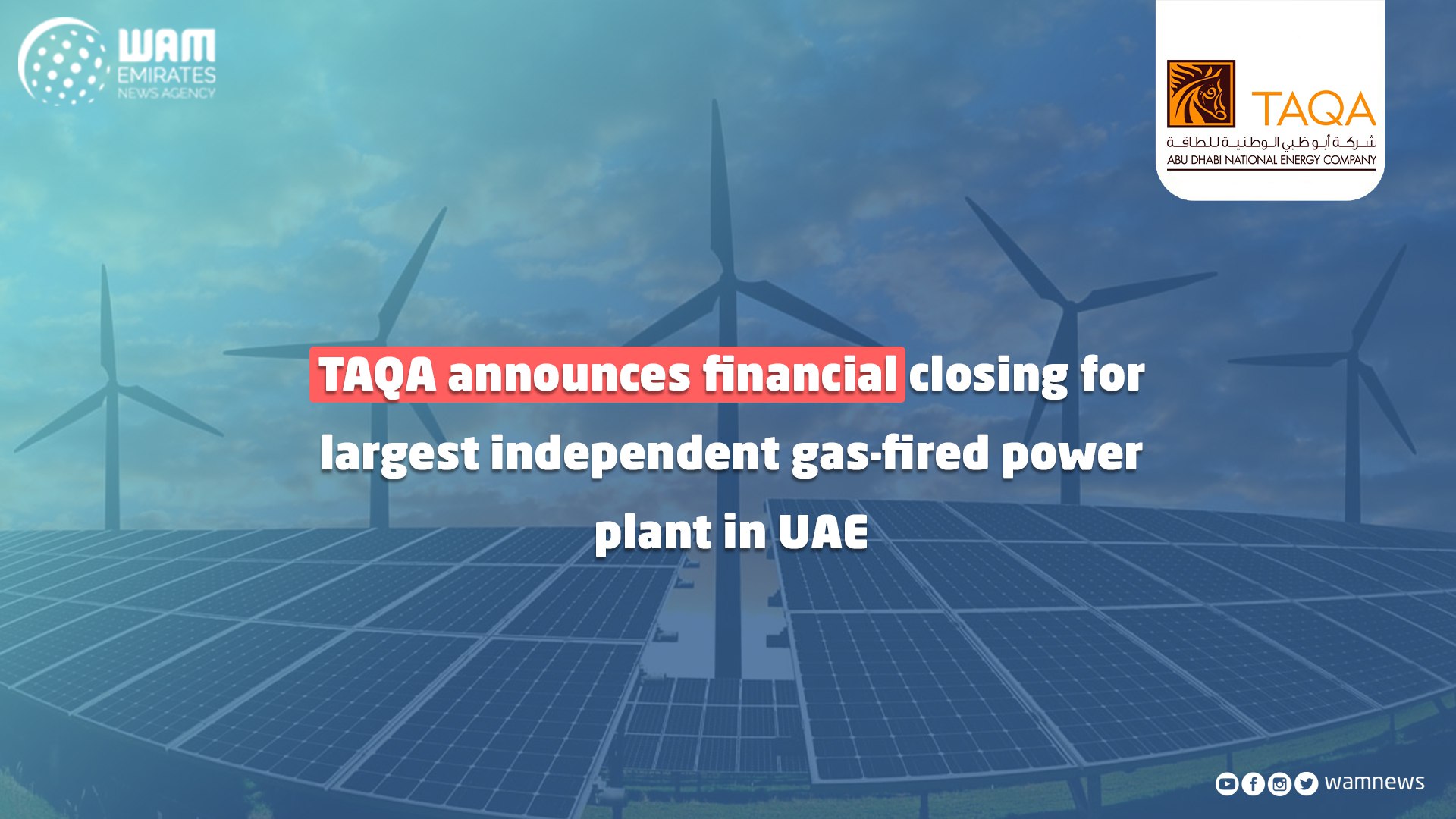 Abu Dhabi National Energy Company, TAQA, announced on Tuesday the successful financial closing for the largest gas-fired power plant in the UAE. The AED4.2 billion Fujairah F3 Independent Power Producer, IPP, project will have a power generation capacity of 2.4 GW – equivalent to the powering of 380,000 UAE households. The power plant is expected to begin early power generation by summer 2022, with full power generation expected by summer 2023, the company said in a statement on Tuesday. The financial closing follows the signing of the power purchase agreement and shareholder’s agreement between Abu Dhabi Power Corporation, Emirates Water and Electricity Company, Mubadala Investment Company and Japan-based Marubeni Corporation. The Fujairah F3 plant will incorporate state-of-the-art "JAC"-class gas turbine technology, sourced from Mitsubishi Heavy Power Systems, and, once constructed, it will utilise the most efficient combined cycle technology in the region. The Fujairah F3 plant will be located in the Qidfa area of the Emirate of Fujairah, nestled between the existing Fujairah F1 and Fujairah F2 water and electricity plants. TAQA and Mubadala will jointly hold a 60 percent equity interest in the project, while the remaining 40 percent will be held by Marubeni Corporation. The total project will have external funding sourced from a consortium of international multi-lateral and commercial banks, including Japan Bank for International Cooperation, BNP Paribas, Mizuho Bank, Sumitomo Mitsui Banking Corporation, Sumitomo Trust Bank, and Standard Chartered Bank. "The Fujairah F3 project is a landmark for TAQA and its generation assets, following the company’s integration with ADPower. It will be the largest gas-fired power plant in the UAE, and, by utilising advanced combined cycle technologies, it will be one of the most efficient in the region. Announcing the financial close of this project accelerates the transformation of the power and water sector, as TAQA delivers significant progress on important large-scale infrastructure projects in the UAE," Farid Al Awlaqi, the newly appointed Executive Director of Generation at TAQA, commented. Mohammed Al-Huraimel Al Shamsi, Head of Utilities at Mubadala, said, "The Fujairah F3 project stands as a testament to the resiliency of this nation and our ability to overcome challenging times to continue to deliver the needs and expectations of our communities. To achieve financial closing of such a large scale project is not only recognition of the viability and sound economics of the project itself, but also to the strength of the partners involved and Mubadala is proud to partner with TAQA, EWEC and Marubeni to deliver such essential infrastructure in the UAE." Today’s financial closing follows the announcement of TAQA’s successful transaction with ADPower on 1st July, 2020, which created the UAE’s 3rd-largest publicly listed company by market capitalisation and a top-10 utility player in the EMEA region by regulated assets. As part of the transaction, the majority of ADPower’s power and water generation, transmission and distribution assets were transferred to TAQA in exchange for 106,367,950,000 new shares.