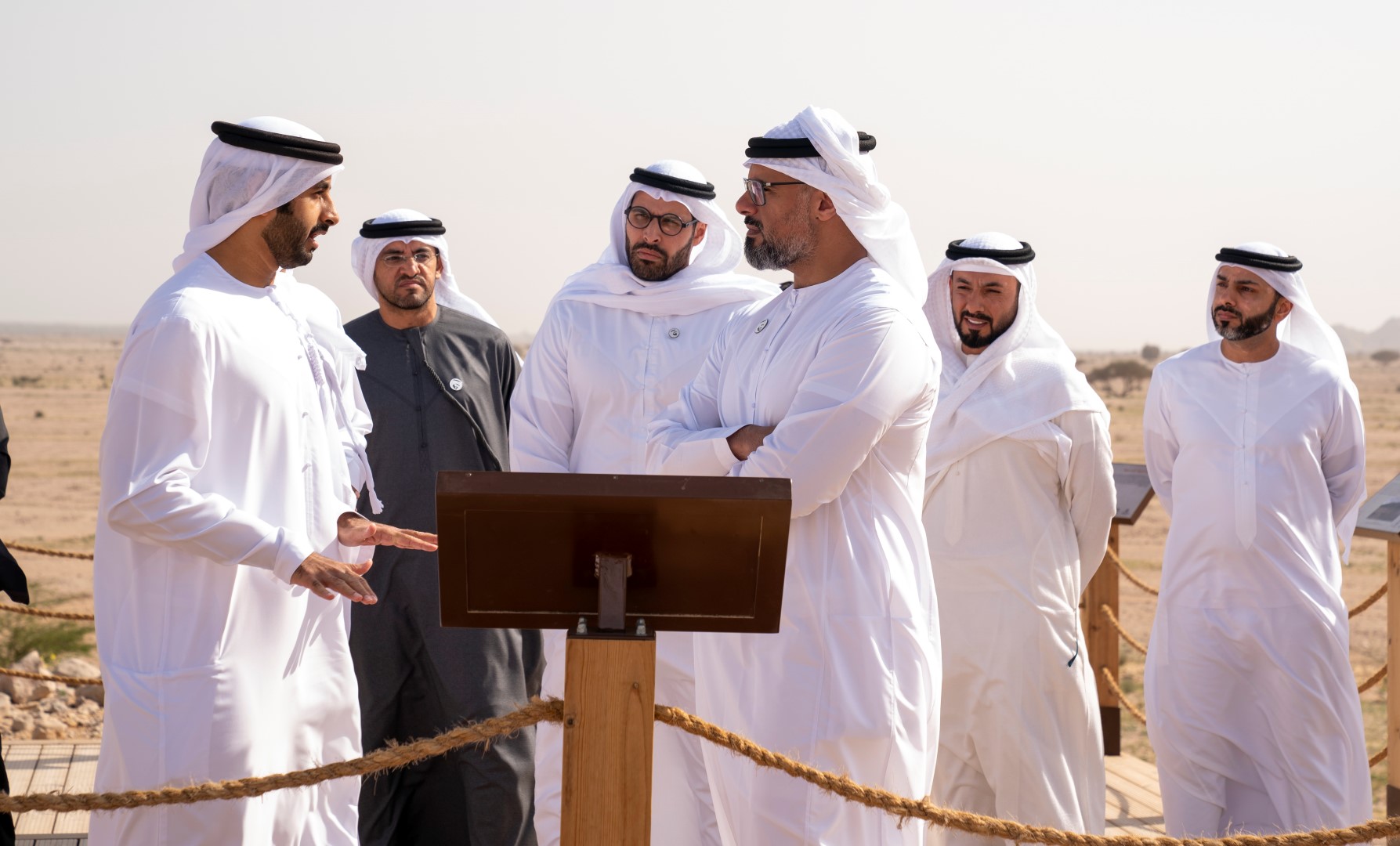 H.H. Sheikh Khalid bin Mohamed bin Zayed Al Nahyan, Member of the Abu Dhabi Executive Council and Chairman of the Abu Dhabi Executive Office, has today inaugurated a new tourist attraction in Al Ain, which features archaeological and historical remains as well as outdoor adventure activities. Jebel Hafit Desert Park, located about 20km south of Al Ain on the eastern flank of Jebel Hafit mountain, was launched by the Department of Culture and Tourism – Abu Dhabi (DCT Abu Dhabi). The opening was also attended by Sheikh Khalifa bin Tahnoun Al Nahyan, Executive Director of the Martyrs' Families' Affairs Office, at the Abu Dhabi Crown Prince's Court, Mohamed Khalifa Al Mubarak, Chairman of DCT of Abu Dhabi, Falah Al Ahbabi, Chairman of the Department of Municipalities and Transport, Saood Al Hosani, Acting Under-Secretary of DCT Abu Dhabi, and other dignitaries. After the opening ceremony, H.H. Sheikh Khalid was given a tour of the park to see for himself the facilities available there. The Park is part of the first site in the UAE to be designated as a UNESCO World Heritage Site and contains numerous unique archaeological discoveries, some dating back to 8,000 years. The new attraction will also feature a range of outdoor activities, including bike riding, guided hiking tours, several camping options – from luxury ‘glamping’ to individual tent camping – and also guided tours in powered carts. Visitors can also explore the scenery in the Park at their own leisure using the self-guided trails and signs. "It is part of DCT Abu Dhabi’s mandate to preserve our cultural heritage, while also offering innovative, immersive and entertaining experiences for residents and visitors alike, and Jebel Hafit Desert Park does just that," said Mohamed Khalifa Al Mubarak. "The Park will appeal to anyone with an interest in the archaeology and history of the region, as well as those who enjoy adventurous outdoor activities. So, we look forward to welcoming those from within the Abu Dhabi community and visitors from further afield to this incredible new attraction." The Park’s archaeological sites reflect many of the major transformations that have taken place through the country during the past 8,000 years. Evidence suggests that this region saw the development of successive prehistoric cultures, from the Neolithic to the Iron Age, which saw its inhabitants’ transition from nomadic societies to the sedentary occupation of the oasis we see today. Among the Park’s key attractions are a series of restored and unrestored Bronze Age Tombs. In 1959, the UAE’s Founding Father, the late Sheikh Zayed bin Sultan Al Nahyan, then the Ruler’s Representative in Al Ain, invited a group of Danish archaeologists to excavate these important shaped tombs. Sheikh Zayed believed that the ancient mounds at the site contained important evidence about the country’s deep history. The Danish archaeologists began work in 1961 and determined that the tombs dated back to 5,000 years ago. The village of Mezyad, to the south of Jebel Hafit Desert Park, became an important settlement and a number of historic buildings were built to defend key approaches to Al Ain. This includes the fort at Mezyad, believed to have been built in the 1890s. The fort will be re-opened to the public during the upcoming next phase of the project. Al Ain contains some of the most prized and unique attractions in the region and internationally. These include other UNESCO World Heritage Sites, such as the six oases and the archaeological sites of Hili and Bida bin Saud.