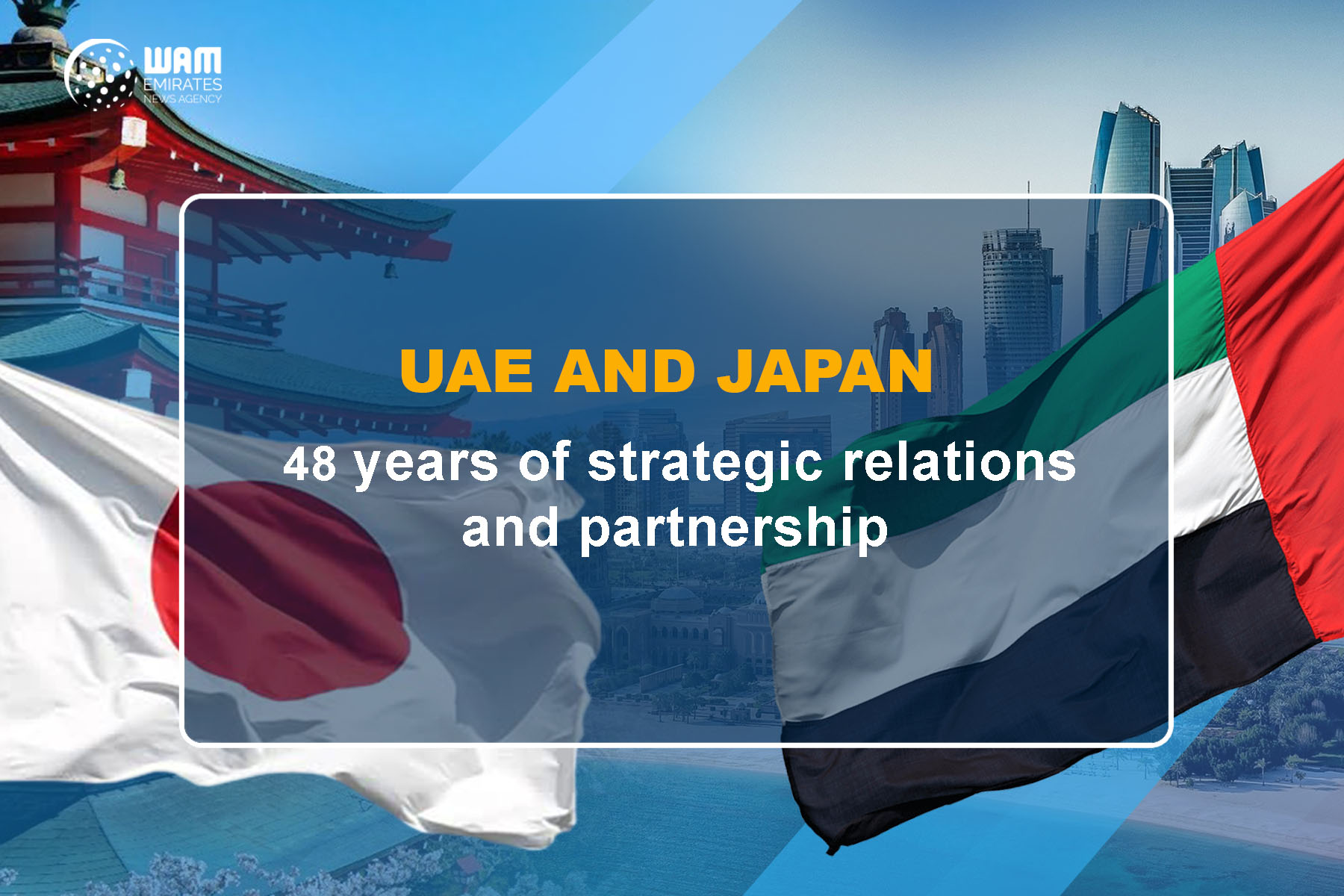 Today’s visit of Shinzo Abe, Prime Minister of Japan, to the UAE is a new milestone in the 48-year strategic partnership between the UAE and Japan. Japan is among the first countries to establish diplomatic ties with the UAE in 1971. The UAE Embassy in Tokyo was inaugurated in December 1973 and the Japanese Embassy was inaugurated in Abu Dhabi in April 1974. The bilateral ties between the two countries have significantly developed, aided by the support of their leaderships and their mutual keenness to reinforce their ties. Their bilateral relations have witnessed mutual official visits by their leaders. The late Sheikh Zayed bin Sultan Al Nahyan visited Japan in May 1990, when he met with senior Japanese officials, and most notably Emperor Akihito. In 2007, His Highness Sheikh Mohamed bin Zayed Al Nahyan, Crown Prince of Abu Dhabi and Deputy Supreme Commander of the UAE Armed Forces, made a historic three-day visit to Japan, when he met with the Emperor and Prime Minister Shinzō Abe, who made a similar visit to the UAE in the same year. In 2014, His Highness Sheikh Mohamed bin Zayed met with Emperor Akihito in Tokyo and discussed, with Abe, the cooperation and friendship between the two countries and other topics of mutual concern. In 2018, His Highness Sheikh Mohamed received Abe to discuss the strategic cooperation between the two countries and ways of reinforcing ties between the two sides. In a joint statement at the end of the visit, both parties stressed their commitment to working together to achieve prosperity and stability, as well as to draft a joint cooperation strategy and vision, under the framework of the Comprehensive Strategic Partnership Initiative, CSPI. In 2016, the number of Japanese citizens living in the UAE totalled 4,000 while hundreds of Emirati citizens are in Japan for educational and investment purposes. The economic ties between the two countries are witnessing ongoing development, and Japan is the UAE’s top trade partner in the world. Japanese investments and advanced technologies have played a key role in supporting the UAE’s development, especially in advanced technology, renewable energy, aviation and healthcare. The UAE is Japan’s No. 2 oil supplier, providing, by September 2019, around 29.9 percent of Japan’s total oil imports. In 2018, Japan acquired a 40-year oil concession in Abu Dhabi. Tourism between the two countries has played a key role in strengthening their friendship and cooperation. The number of Japanese tourists visiting the UAE totalled 91,000 while the number of Emirati citizens visiting Japan for tourism significantly increased, especially after Japan exempted them from having to obtain pre-entry visas on 1st July, 2017. National airlines operate daily flights to several destinations in Japan, most notably to Haneda Airport, Kansai International Airport and Narita International Airport. The two countries have established distinguished cultural and scientific relations dating back to before the establishment of the UAE’s Federal System. The Emirate of Abu Dhabi participated, through a special pavilion, in the Expo '70, Osaka, and after fifty years, the UAE will host the Expo 2020 Dubai, which will witness a significant Japanese presence. Education is one of the major components of the bilateral ties between the two countries. In 1978, the first Japanese school was inaugurated in the UAE, and in 2009, it began teaching the Arabic language, Islamic education and social studies to Emirati students, along with its Japanese curriculum. Over 100 Emirati students are also studying in Japanese universities for bachelors, masters and PhD degrees, especially in engineering and information technology. The two countries are closely cooperating in space sciences. In October 2018, the Emirati satellite, "KhalifaSat," was launched into outer space from the Tanegashima Space Centre in Japan aboard an H-IIA rocket. In September, the Mohammed bin Rashid Space Centre, in cooperation with the Japan Aerospace Exploration Agency, JAXA, organised educational events that explained the use of the "Int-Ball" robot camera. Emirati astronaut Hazza Al Mansoori explained, in detail, how to operate the robot camera on a live broadcast from the International Space Station, ISS.